The Origin and Evolution of the Gonfalon

3.72k
Facebook Twitter LinkedIn Pinterest WhatsApp Email Copy link Your browser does not support automatic copying, please select and copy the link in the text box, then paste it where you need it.
About the word and its origins

The word gonfalon comes from the Italian word confalone, but you are probably wondering: what exactly is a gonfalon? A gonfalon is a heraldic flag or banner that is suspended from a crossbar, it can be pointed, swallow-tailed, or have streamers, and it is very similar to what was known as vexillium in ancient Rome. Originally, confalone was the name given to a neighborhood meeting all the way back to medieval Florence. Each neighborhood that attended the meeting or confalone, had a representative flag and coat of arms and, ultimately, the word became associated with the flag itself  that's how the modern gonfalon acquired its name.

About the flag and its uses

Gonfalons were used to label a household, fighting unit, or office. They were later used by religious communities  especially by Christian denominations  where they had great significance and were used to represent holy symbols during processions. These religious gonfalons depicted various representations of the Virgin Mary, Jesus, and some saints. With the rise of the Renaissance and Enlightenment periods, gonfalons were gradually adopted by educational institutions and are used in both the religious and educational communities to this day. In the education sector, gonfalons are used during commencement ceremonies to represent the different schools and disciplines within an institution, including features such as each school's colors, tagline, or emblem. In the Netherlands, they have an official gonfalon called Gonfalon of State or Rijksvaandel, which is a white banner made of moiré silk that has the sovereign's coat of arms, as they were in the 19th century, symbolizing the nation. The coat of arms of the country has changed since then, but the image on the gonfalon has remained. This Dutch regalia is only used when a new king or queen is named.

About the flag and how it is made

The use of the gonfalon is not the only thing that has changed over the centuries. In medieval times, they were made of coarse cloths or, sometimes, silk. They were typically hand painted with tempera and/or oil paints, but they were also appliqued and embroidered. Can't you just picture ladies proudly sewing and embroidering their household's gonfalon?

As time has gone by, new technologies and techniques have been developed to improve the way they are made. Nowadays, there are different ways to make them, such as appliqué, which is a needlework technique where layers of fabric are sewn to a base; embroidery, which uses threads to create a design; and dye-sublimation, which consists of a digital printing process that uses heat to transfer ink onto the fabric.

The advantages of dye sublimation are that the image or images are permanently transferred to the fabric, the colors can be matched to almost perfection, and it provides the possibility to blend traditional and modern images with intricate designs. Dye sublimation is, actually, quite an interesting process. Sublimation is the process whereby a solid substance transforms directly into vapor. During dye-sublimation, the ink is embedded in the fabric through heat and pressure. Thus, the image becomes part of the fabric itself. That is why it so durable and the quality of color is very good.

If you want to learn more about gonfalons, we invite you to download "Gonfalons Are My Life" for free, where you will find more interesting facts about this emblematic banner. Call us (404) 367-8660 or message us through the contact us form to get your free quote.

Blog Category: Gonfalons
3.72k
Facebook Twitter LinkedIn Pinterest WhatsApp Email Copy link Your browser does not support automatic copying, please select and copy the link in the text box, then paste it where you need it.
Don't Miss These Other Must Read Articles 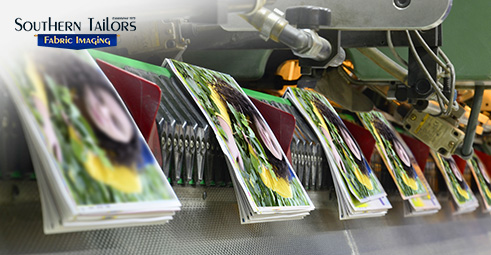 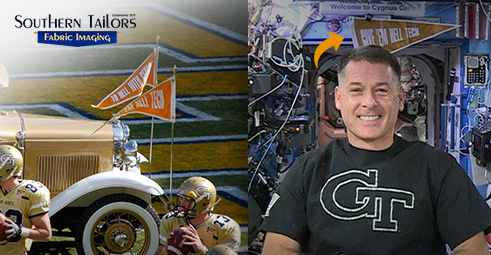 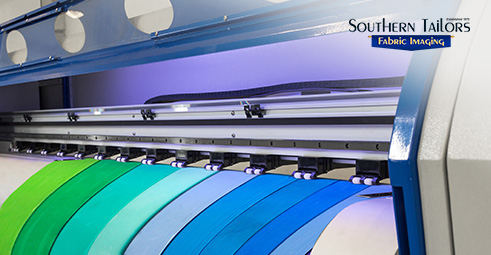 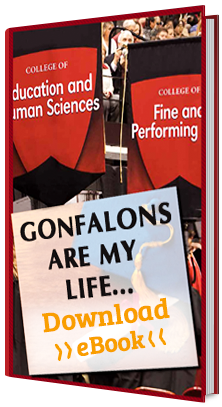